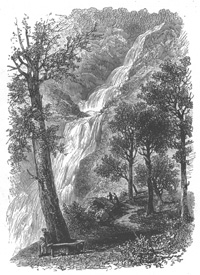 Úna Wogan catalogues some tragic accidents at Powerscourt Waterfall over the last 150 years that were reported in the national media.

Powerscourt Waterfall deserves the thousands of visitors it receives each year as, viewed from below or above, it’s one of the most beautiful scenes in Ireland, particularly when the waters are at full flow. Michael, in his article on the royal visit mentioned that King George IV, in declining to visit the falls, had escaped what could have been a most unfortunate accident when the released waters swept away the platform the king was to stand on. Tragically the waterfall has been the scene of several fatalities stretching over the past one hundred years and more. Despite the obvious danger involved, the challenge of mastering the 397ft climb to the summit has acted as a beacon for those with a sense of adventure, unfortunately with sometimes tragic results.

As early as July of 1853 the Freeman’s Journal reported on an tragic incident when Mr James Rostern from Manchester, on a tour of Ireland with his friend Reuben Levy, decided to visit the Dargle and Powerscourt Waterfall. Against the wishes of his friend James decided to make the climb up the south face of the falls. After resting some distance up the cliff and smoking his cigar he threw his hat down to his friend and began his descent. Mr Levy said that he went to retrieve the hat which was blown towards the stream. As he reached the rocks he found the lifeless body of his friend. He said he had heard no shout or moan as his friend fell.

In 1862 the Freeman’s Journal reported it received ‘melancholy intelligence’ that a young gentleman named Wilson, on a visit with Rev Mr King of Enniskerry, had attempted to ascend the rocks adjacent to the waterfall. Sadly Mr Wilson’s foot slipped ‘at a great height from the ground’ and was instantly killed when he fell to the rocks below. The newspaper declared that this occurred ‘at a spot where no less than four persons at different times lost their lives’.

The Freeman’s Journal in 1910 again reported on another ‘Melancholy Event’ when a young man named as M’Larne, on a day trip with family and friends, was found to have fallen from the top of the waterfall and had been ‘dashed to pieces’. Mr M’Larne was described as being of about 21 years old and of ‘most excellent and valuable character’ and he had resided in Hoey’s Court where he ‘followed the business of painting and glazing’ and supported his mother and three sisters.

In September 1929 the Irish Independent reported that a young Dublin man called Donald Neill, aged 22, sustained a fractured skull after falling from a height of 30 or 40 feet when he ‘essayed to climb’ the face of the cliff. Young Donald was taken away to hospital alive; hopefully he recovered and went on to live a full life. Unfortunately Donald’s accident did not act as a deterrent and the very next year in June 1930 a young man once again attempted to scale the rock face. John Fitzgerald, a 20 year old from Dun Laoghaire, despite the efforts of a Dr J O Donoghue, himself on a day trip with his son, died within twenty minutes of his fall.

Another tragic accident in April 1960; two young friends decided to cycle from their homes in Dublin to Enniskerry and the Waterfall on a day trip. Raymond Cagney and Patrick Bracken were only 12 years of age. Again the temptation was just too much and Raymond, against his friend’s advice, decided to try and climb to the top of the falls. It was thought that Raymond had gotten to about 100ft before he slipped, fell to the rocks below, and died instantly. The Irish Independent reported that waterfall was at a ‘mere trickle’ but that although the moss on the rocks appears dry on top it ‘is wet underneath and presents a very slippy foothold’.

It was only seven years later in March 1967 that another young man, again a visitor from Dublin, lost his life in his determination to scale the Powerscourt cliff. Two young couples, James Chaney and his girlfriend Stephanie Donnelly and James’ sister Anne and her boyfriend Robert Mulholland all set out for the scenic spot on two motor cycles from their homes in Finglas. As the girls sat on the grass near the waterfall, the two boys, out of a sense of adventure, decided to attempt the climb to the summit. It must have been horrific for James’ sister, girlfriend and friend when they witnessed his fall. Despite the effort of others at the scene, and the Firemen who arrived within thirty minutes, James died from his injuries.

Unfortunately the tragedies continued and in 1972 another young man lost his life. This time visiting from Worcestershire in England, the Vaughan-Salmon family had just finished their picnic lunch when the two sons, Stephen aged 18 and 12 year old Christopher, headed off to see the waterfall. The Irish Independent reported that a witness, Rory Wilson of Kilgobnet, Stepaside saw the tragedy unfold. He said he saw the two boys climbing up the face of the falls when the older boy, who was lower than the other, lost his grip and fell to his death. The family were lucky not to lose both sons. A helicopter from the rescue unit in Baldonnel was called to secure the 12 year old from his perch 200ft from the ground.

November the fourteenth in 1981 saw a particularly dreadful accident occur. This time the young man that lost his life did not try to climb the face of the waterfall but died from a fall from the top when he tried to save his dog. Three young brothers, Colm, Ciaran and Brian Daly from West Finglas decided to take the family dog and spend the afternoon at the Waterfall. After making their way to the top of the falls the dog went too close to the edge. Colm, aged 28, made to grab the dog but slipped on the rocky surface and fell the almost 400 ft. His injuries were so severe he died later in hospital.

Again, another young visitor, this time a female, lost her life from a fall off the summit of the waterfall in August 1991. Sylvie Gratt aged 24, on holiday from France with her boyfriend, had been walking along the top of the cliff. The edge was fenced off which led the authorities to believe the couple were walking on the outer side of the fence when the accident happened. Poor Sylvia died from head injuries in hospital soon after the accident. The Independent newspaper commented that a similar accident occurred two years before.

As someone with a healthy fear of heights I can’t imagine ever looking at Powerscourt Waterfall and yearning to climb to the top. However I do remember as children walking, even running, across the sides of the bridge near the Bog Meadow although we were all aware someone had previously fallen off. This account of the tragedies at the Waterfall illustrates that sense of mortality that most young people lack. With all the dangers involved that desire to reach the top has just proved too tempting to resist. Hopefully the warning signs, fencing and knowledge of past tragedies will be successful in deterring any further climbs, however the records of events over the past one hundred years would indicate otherwise.

4 thoughts on “Tragedies at Powerscourt Waterfall”