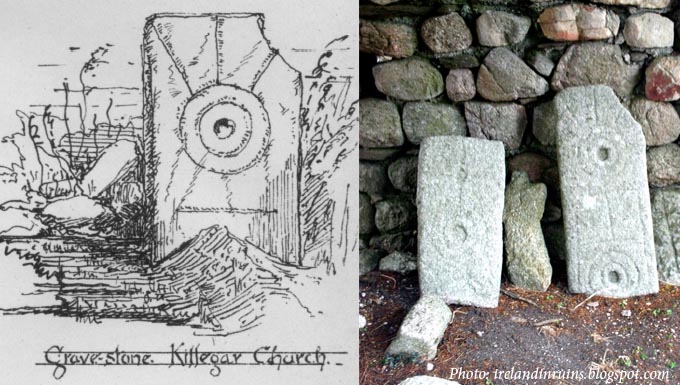 “The cycling season is coming on,” wrote Rev. Professor George Thomas Stokes in 1891, “and cycling ought to be a great help to archæology.”

And so he introduces his article on Killegar Church, which he says can be found by taking the road to Dundrum, and following “the high road to Stepaside…, riding through the Scalp and taking the first narrow road on the right to Killegar House*. After ascending about three hundred yards, there is a gate on the left which leads into a field… you will come to a wild uncultivated piece of woodland… and here in the corner is the cemetery of Killegar as used to this day with the remains of the ancient church.” Modern day visitors might wish to check out a recent post on the Ireland in Ruins website for directions, and whose photos illustrate this article.

History of the Site

The name Killegar was written as Kilathegair on ancient records, which Stokes considers to mean Church of Agar’s Ford. Liam Price’s records suggest Church of Adghar’s Field – neither name offers much help. Stokes argues that it was once an important church in the diocese of Dublin, based on evidence from a range of sources. The Papal Bulls were written around 1179 and listed the Dublin and Wicklow parishes. This was of course around the time of Norman invasion, and so declaration by the church of their land ownership would have been important (this was in turn to determine the history of the area for several centuries up to the last!). Killegar is not mentioned in these records. But when St Patrick’s was made into a cathedral by Archbishop Henry de Londres in 1220, he created a dean, precentor, chancellor, and treasurer as for chief dignitaries. Thomas de Cravill was the second Chancellor and was rector of Killegar until he “tired of Killegar”, moving to the prebendal parish Finglas, which was “a much more civilised and quiet neighbourhood”, more suitable for “a respectable English dignitary”, to use Stokes’ phrases. Killegar is again mentioned in the Episcopal register (Crede Mihi) from around 1270, but its status appeared to be falling somewhat. It had been worth £13 6s 8d (20 marks), with an incumbent John de Mancford, but of late it was worth nothing, and the archbishop was the patron. But by 1300, the parish was included in the taxation list of Pope Nicholas IV. In 1300, its value was £10 13s 4d per year, suggesting that Killegar was “then one of the good livings of the diocese” as it compares well with the value of other abbeys and parishes (St Thomas’ Abbey – £80, Prebend of Swords – £60, St Mary’s of Dublin (old) – £5). The latest mention is in 1530, when Killegar and its dependent chapel (Clumme or Dunmine) are noted by Archbishop Alan in his register of parishes. There is other evidence to suggest Killegar was a well frequented, well documented place, probably the site of a vill (small village) of some sort.

Eugene O’Curry, a man we have much to be thankful for, reported to the Ordnance Survey in 1838 that:

The ruins at present consist of two parallel walls running from west to east, and well built of the common surface granite of the County, and lime and sand mortar. These walls are 22 feet long, 7 feet high, 2 feet thick, and 13 feet asunder. There are no windows, but the northern wall has four small holes running through it, and the south side two similar holes.

There were just two inscribed headstones at that date, one to John Keene, 1747, the other to James Humphrey, 1830. The site offers extensive views of the district, and was used by the Ordnance Survey as a reference point for local mapping, including Enniskerry village and surroundings.

Thomas Drew visited the church in 1869 and reported that “It may be remarked that this church is of considerable dimensions, consisting of a nave and chancel, and wears an aspect of most remote antiquity, suggestive, in its characteristic masonry, of the churches of Glendalough.” We know from Stokes’ later writing, described above, that Killegar was indeed an important church in the area.

The most exciting feature of Killegar though, are the unusual slabs found at the site. These slabs, first noticed in Stillorgan in 1781, and are now called Rathdown slabs, are known only in Ireland to be located in the barony of Rathdown (south county Dublin and North Wicklow), mainly at Rathmichael, but also at Ballyman—which was also described by Drew—and Killegar. There is a slab from Ballyman on exhibition in the National Museum of Ireland in the Viking section, as these slabs were carved by Christian Vikings who settled in the area long after their original invasion. The slabs have been extensively studies by Ó’hÉailidhe, who records the details of both slabs shown in the photograph, along with a third bearing a cross (cropped out of this photo but on the original – see website).

And so Killegar church’s timeline history at least matches the history of our own area. It probably existed prior to the Viking invasion – perhaps associated with Glendalough or Dublin dioceses, and was used as a place of worship in Viking times, and through the Norman invasion of the twelfth century. It was involved in the to-and-fro of land ownership in the post Norman era and its mention in the sixteenth century comes just before the Wingfield Grant to Powerscourt. When it became a ruin is open to question.

The Ballyman slab was moved to the museum in 1940, but before that was “recycled” as a lintel in an old church in Ballyman – St Kevin’s. Stokes provides some details of this (as does Drew, who sketches some part of the old church):

…a little farther opposite Mr. Barrington’s, if you descend a steep hill to the banks of the rippling stream which flows from the Scalp, you will find in a lovely retired situation a beautiful specimen of a real old Celtic church of the sixth or seventh century, dedicated to St. Kevin, with a holy well beside it, which is still resorted to. It is a genuine specimen of an ancient Celtic church, with a tiny lancet window in the east end, but without any chancel, contrasting strongly with Killeger Church, which is Anglo-Norman in its style of building.

Between this site and Killegar are/were the ruins of yet another church, Annahaskin (known on pre-Ordnance survey maps as Eelford) and a little beyond St Kevin’s is “the ancient village of Old Connaught” with its own ancient church. In the surrounding area are Churchtown and Stagonil churches, and probably many more. In the words of Rev. Stokes:

I can only wonder where in these ancient times congregations were found for all these churches so close together, and how means were found to support the clergy.